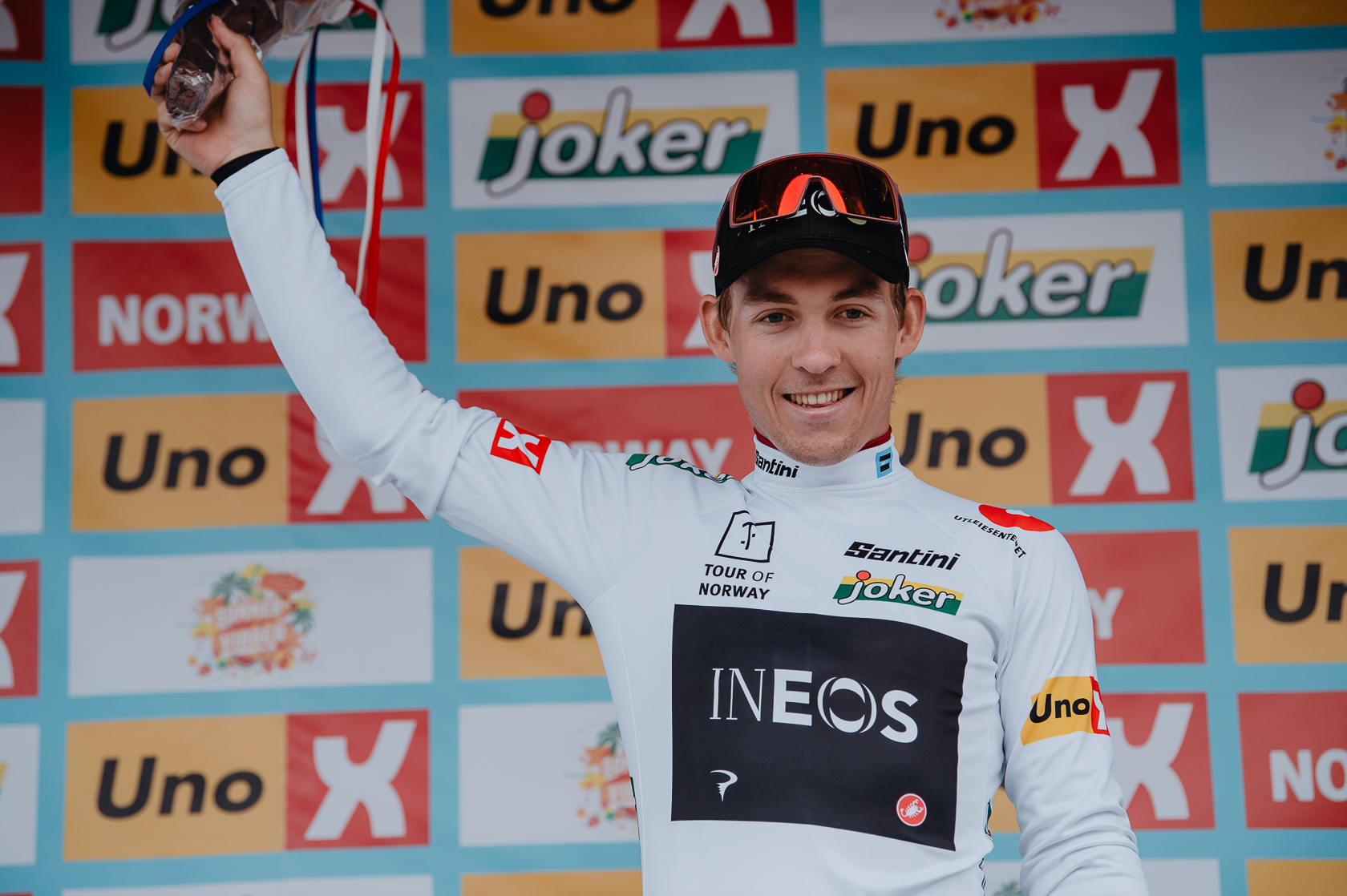 How the 2019 Joker young jersey was won: better late than never

Tour of Norway has revealed a number of talents in the past few years among which Mads Pedersen winner of a stage in 2016 and now World Champion. This year we got the chance to welcome some of the most talented young riders such as Remco Evenepoel, Marc Hirschi, Edoardo Affini, Kristoffer Halvorsen and many others. There have been five different Joker young jersey wearers in 2019 and it is only on the last stage that Halvorsen conquered the jersey!

The Joker young jersey is awarded to the best ranked rider in the general classification aged 23 and under. In 2019, there was 29 riders in the peloton who were eligible to compete for this jersey. The youngest of them was 19-year-old Søren Wærenskjold of Joker Fuel of Norway.

On the first race day, a breakaway of four riders managed to form quickly after the start. Among them, only one was under 23 years old: Jacob Eriksson. The Team Coop rider actually had quite a margin on the age limit to compete for the Joker young jersey as he was only 19 years old at the time of the race. At the second intermediate sprint in Vikeså, Eriksson managed to cross the line third and thus take one bonus second. In the last ten kilometers the peloton caught the escapees one by one. In order to wear the Joker young jersey at the end of the stage, Jacob Eriksson needed to stay in the peloton and hope no rider under 23 years old would finish in the Top 3. Luckily for him, this scenario took place and he got to be the first one to wear the jersey.

The second stage saw seven riders escape from the peloton. Omer Goldstein of Israel Cycling Academy and Eirik Lunder of Team Coop were the two under 23 riders of the breakaway. Goldstein was the only one of the two who managed to grab a bonus second at an intermediate sprint. It wasn’t enough however to claim the jersey as the young Colombian Álvaro Hodeg triumphed in Mandal and took ten bonus seconds. The Deceuninck - Quick-Step rider led the classification, four seconds in front of Kristoffer Halvorsen who finished second of the stage.

The breakaway of the third stage included once again a rider of Team Coop aged under 23: André Sotberg. It was the third different rider in three days, but no hope was given to him as the peloton rode hard and caught the break more than 30km before the finish line. Many attacks happened in the last kilometers of the stage. Finally, Edvald Boasson Hagen managed to win with a two second margin on 23-year-old Joris Nieuwenhuis. Second of the stage, the young rider of Team Sunweb donned the white jersey.

The fourth stage was the first of the 2019 edition in which the morning breakaway managed to resist to the peloton until the end. Surrounded by experienced riders such as Sander Armée and Tom Scully, Edoardo Affini was the only one of the 7 escapees to be aged under 23. Not impressed, he killed two birds with one stone winning the stage and taking the Joker young jersey! The Italian told after the stage that he wasn’t thinking he would take the white jersey. “It is a plus, I’ll try to give my best and we will see how it goes”.

With two stages to go, Edoardo Affini had a ten second margin on Joris Nieuwenhuis and an eleven second margin on Kristoffer Halvorsen. The two last stages were the toughest, yet the Norwegian sprinter of Team Ineos managed to stay both times with the leading group and fought for the stage victory.

On the fifth stage, Halvorsen ended up third behind Kristoff and Hodeg. He got four bonus seconds thanks to this place and was only seven seconds behind Affini before the last stage. Yet, if the Italian rider managed to finish in the same time as him on the final day, Halvorsen had to win the stage or combine a podium with bonus seconds taken at intermediate sprints to claim the Joker young jersey. After finishing second in Mandal and third in Drammen, the Team Ineos rider finally won a stage on Tour of Norway, for the first time in his career. In Hønefoss, he outsprinted Alexander Kristoff and Cees Bol to claim his fourth professional victory, get a podium spot in the GC and don the Joker young jersey. A great day for him!

About the Joker young jersey: