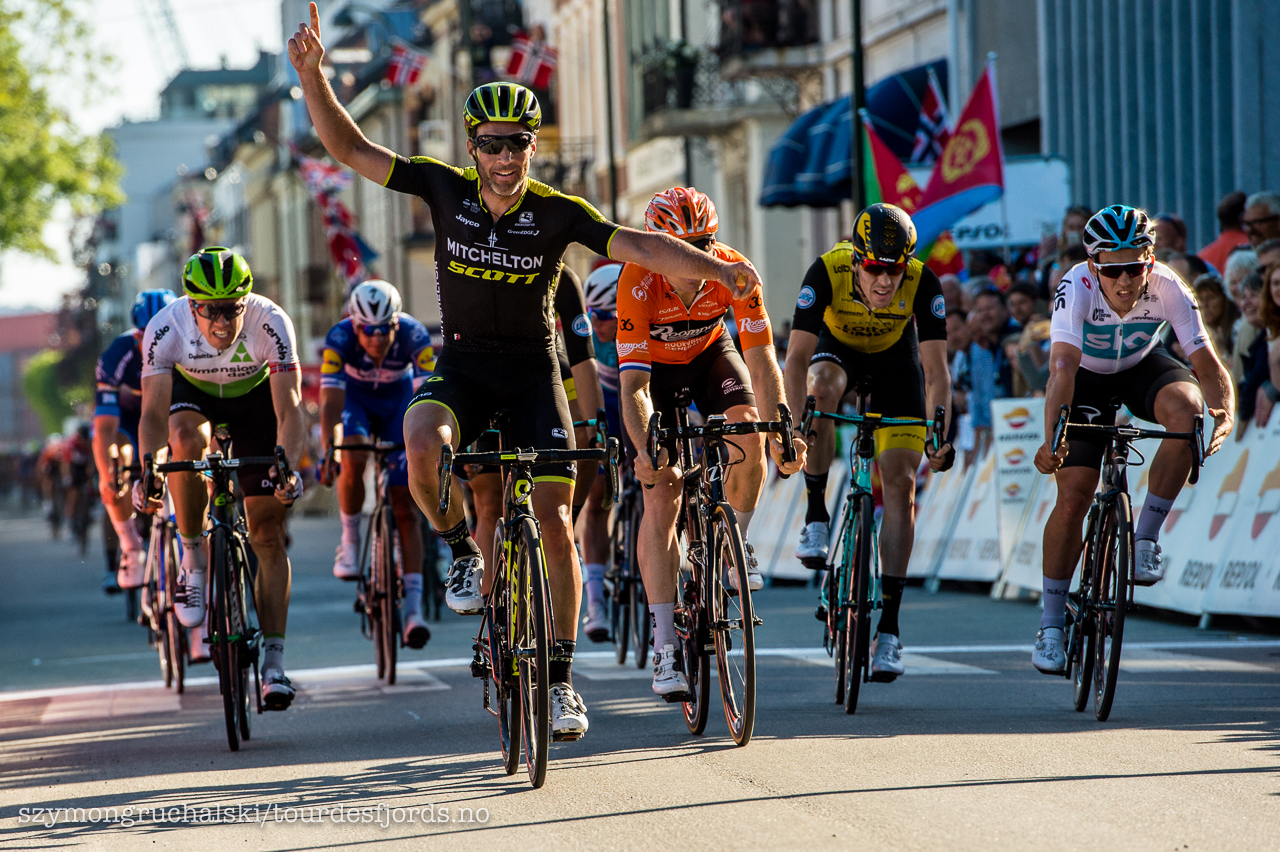 The attacks were flying in the last 20 kilometers, but in the end it came down to a sprint in Kristiansand.

Michal Albasini (Mitchelton-Scott) was crowned stage winner on stage 2 of Tour des Fjords, after beating other fast men in front of thousands of people in Kristiansand. Behind him followed Pim Ligthart (Roompot-Dutch Lottery) and Kristoffer Halvorsen (Team Sky).

It was a spectacular final. Floris Gerts (Roompot-Dutch Lottery), Axel Fischer Aasheim (Joker Icopal) and Michael Gogl (Trek-Segafredo) formed the breakaway that for a long time animated the stage. Gogl dropped back to the peloton after the second #HammerStavanger sprint with 79 kilometers to go, and the remaining two riders got chased down with about 40 kilometers left. Thus, we were in for an exciting finale in and around the city center of Kristiansand, where the attacks came left, right and center.

The local rider Krister Hagen (Team Coop) was among those who were on the attack. After forming a front duo with James Shaw (Lotto Soudal) for a few kilometers, he went solo with about ten kilometers left. The attempt was caught with seven kilometers left, as the riders climbed Gimlekollen for the final time. On the hill and cresting the hill, the attacks came flying, with riders like Søren Kragh (Team Sunweb), Bjorg Lambrecht (Lotto Soudal), August Jensen (Israel Cycling Academy) were among the many riders that tried to escape the bunch. Over the top, twelve riders gathered in the front, but the peloton was chasing and hadn’t given up.

Team Sky took responsibility behind to give their sprinter Kristoffer Halvorsen a chance at the win in front of the home crowd, as he grew up in Kristiansand, next to the Gimlekollen climb the riders did. With 3,3 kilometers left all attackers were caught, and we had a bigger group sprinting for victory. Among those in contention was Tuesday’s winner Fabio Jakobsen (Quick-Step Floors).

From there, Roompot-Nederlandse Loterij took command and controlled the front for their sprinter Pim Ligthart. A number of Norwegians, such as Halvorsen, Edvald Boasson Hagen (Dimension Data), Herman Dahl (Joker Icopal) and Amund Grøndahl Jansen (LottoNL-Jumbo) were among those who were in a position to fight for victory approaching the final kilometer.

Jansen opened the sprint from far out with Albasini following. The Swiss accelerated and came around Jansen. Jansen couldn’t respond to Albasini’s acceleration, and no one else could threaten the Swiss veteran, who stormed to victory. The peloton’s eldest won the stage, having more than a bike length down to Ligthart in second place. Halvorsen followed in third place.

The Tour of Fjords leadership line is still on Fabio Jakobsen's shoulders. The Dutchman got eight on Wednesday’s stage.

Carlos Verona (Mitchelton-Scott) secured the Santander climber’s jersey. He attacked and took four climbing points up Gimlekollen with 30 kilometers left. It secured him the polka dot jersey going into the third stage on Thursday, the Queen stage of this year’s Tour des Fjords.