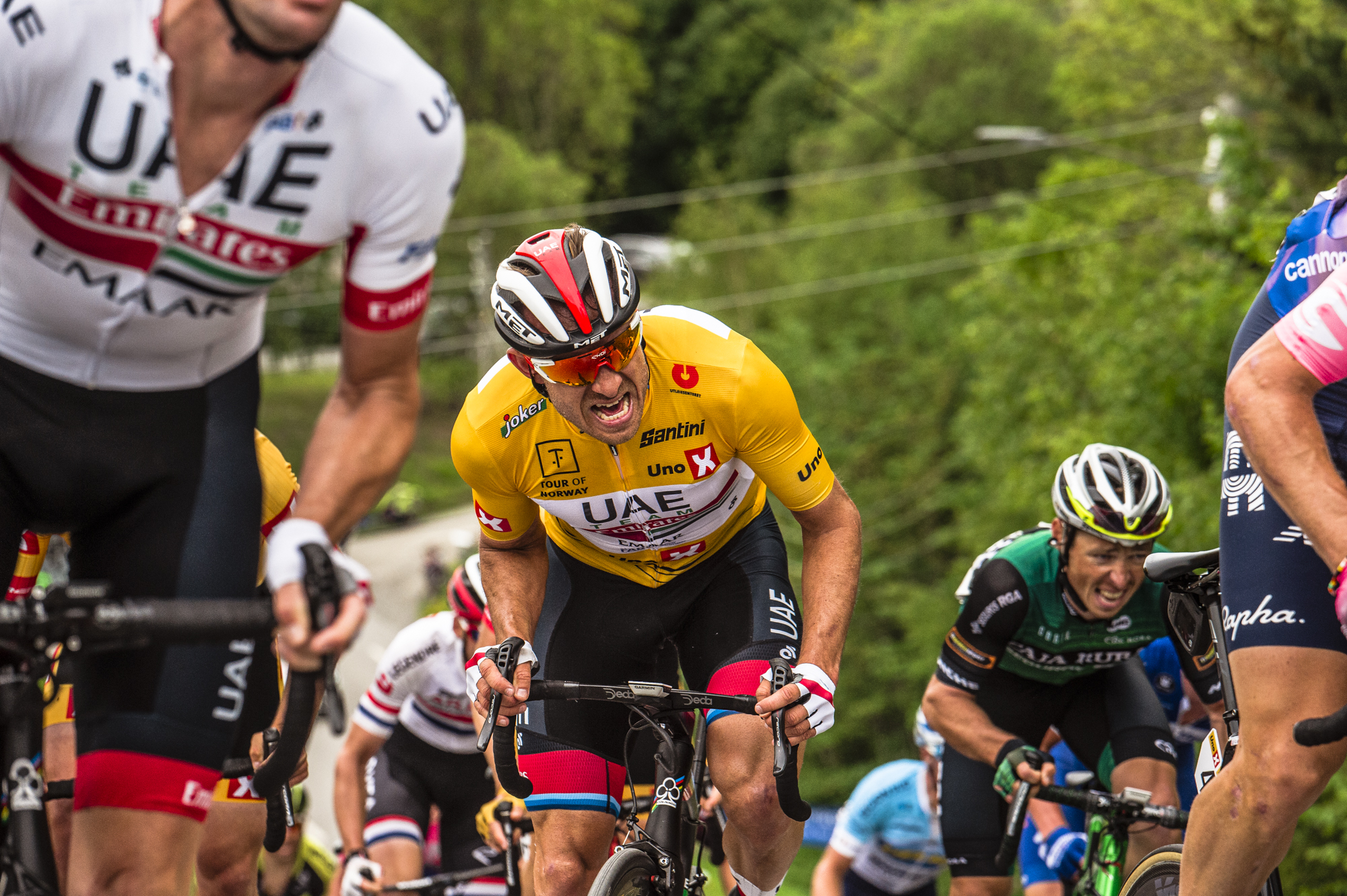 How the 2019 Uno-X Yellow Jersey was won

On the podium of the 2019 edition of Tour of Norway were three Norwegian riders, for the first time in the history of the race and it was no more than 5 seconds which separated Alexander Kristoff, the winner, from Edvald Boasson Hagen, 3rd overall. In between the two Norwegian stars was Kristoffer Halvorsen. The youngster ended up only 3 seconds behind the race winner. This 100% Norwegian podium is the tightest ever of the event. So how did the race unfold?

Tour of Norway 2019 was composed of six stages. The first four were tailor made for sprinters or breakaway specialists, the last two were hillier and could go to climbers or punchers. The time gaps were expected to be short, and thus the fight for bonus seconds was key: 10, 6 and 4 seconds were awarded to the first three of each stage while 3, 2 and 1 second was given to the first three riders at each intermediate sprint.

The first stage ended in Egersund with a sprint finish. Cees Bol from Team Sunweb won thanks to a very well-timed sprint and became the first to don the Uno-X Yellow Jersey. Alexander Kristoff ended 3rd and took 4 bonus seconds. Kristoffer Halvorsen was not far behind in 5th place.

The following day looked similar as Henrik Evensen and Markus Hoelgaard got caught by the peloton with 1,5 kilometers to go and a bunch sprint took place. Yet, the winner was new. Álvaro Hodeg took the stage victory and became the first Colombian to win a stage of Tour of Norway. In the fight for bonus seconds, Kristoffer Halvorsen grabbed 6 finishing 2nd and Edvald Boasson Hagen 4 ended up 3rd. In the Top 10 of the stage, Cees Bol kept his Uno-X Yellow Jersey for one more day. At this point of the race, Alexander Kristoff was 6th, 6 seconds behind Bol.

The third stage was ending with three local laps in Kristiansand. In the last lap, at the exact moment the peloton managed to catch riders who escaped in Bjørnebakken, Ben Swift attacked followed by Edvald Boasson Hagen. The two riders managed to stay away from the bunch and “Eddy the Boss” eventually managed to drop Swift 500m before the line. He finished with the peloton at his heels, 3 seconds behind. The time gap and bonus seconds of this stage win allowed him to take the Uno-X Yellow Jersey. Cees Bol was relegated to 2nd place 7 seconds behind while Alexander Kristoff climbed up to 3rd place 9 seconds behind Boasson Hagen thanks to the 4 bonus seconds of the 3rd place of the stage.

Sandefjord was the theater of the finish of the fourth stage where a breakaway managed to stay clear of the peloton for a mere 7 seconds. Winner of the stage, Edoardo Affini rose to the 2nd spot in the overall classification. It is worth mentioning that Alexander Kristoff managed to take a bonus second in this stage when crossing the line 3rd at the intermediate sprint in Søndeled at the beginning of the stage.

In the first four stages, Kristoff never finished worse that 6th but couldn’t manage to be better than 3rd. It is on the penultimate stage that the UAE rider succeeded. He won the stage in front of Hodeg and Halvorsen. Boasson Hagen ended up fourth but managed to take a bonus second earlier in the stage at the second intermediate sprint. With one stage to go, it was hard to predict who would be the winner of the race. Alexander Kristoff was 1st only 1 second ahead of Edvald Boasson Hagen, 2 seconds ahead of Edoardo Affini and 9 seconds ahead of Kristoffer Halvorsen.

The last stage was probably the trickiest for sprinters with the Smeden climb of 4,1km with a maximum gradient of 17,8% only 11,5km before the line. Yet, most riders managed to hold on and, this time, Kristoffer Halvorsen won the stage. Alexander Kristoff managed to finish 3rd of the stage and the 4 bonus seconds allowed him to stay clear of Kristoffer Halvorsen for 3 seconds only. Edvald Boasson Hagen, who tried his luck attacking with 2km to go, lost one spot overall and ended up 3rd of the general classification.

About the Uno-X Yellow Jersey: